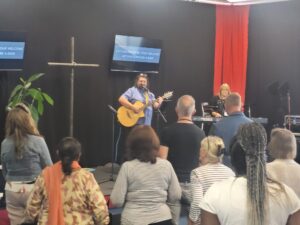 A new Healing Rooms will be opening in West Nottingham in September, The training for this Healing Rooms took place in early July. The following is a report from the team leader.

Our program was 5:30 – 8:30pm Friday evening and 9:30 – 4:00pm Saturday.  The weekend consisted of several different types of input, all of which were fantastic.  To mention a few: background and vision of HR, roadblocks to healing, the authority we walk in as believers, dealing with disappointment, accountability, Healing Rooms core values and prophetic activations.  The teaching was first class, very biblically based and both Veronica and Sue were excellent presenters.  The time went so quickly.  The West Nottingham Healing Rooms will open in September 2022. Between now and then, we are initially meeting for a BBQ to get to know each other more and then we will meet for some prayer times leading up to the opening of the new rooms. Below are just a few comments from people who attended the training.

“Veronica and Sue are excellent trainers, communicators and spiritual mentors.  They presented the Healing Rooms Training Course in a spirit of great humility, faith and love.  Thank you to them both.”

“It was a fantastic 24 hours of input.  My faith was expanded and God spoke to me in this 24 hours.  I am so excited to be part of a Healing Rooms team.”

“As well as learning a very useful model of how to pray for someone, the trainers also imparted their enthusiasm for doing so.  I found all the training sessions to be enjoyable as well as informative and it was a really good start for the newly formed West Nottingham Healing Rooms team.”

“I attended the Healing Rooms training day in Nottingham.  For me it was so encouraging to listen to the speakers use the word of God on healing with what I align with, that healing is in the atonement.  The practice sessions were very helpful and informative.  I left feeling very encouraged and am excited to see God move in the West Nottingham Healing Rooms.”

“The Healing Rooms Conference was both prayerfully planned and sensitively delivered.  It felt such a safe environment to learn about how to listen to people and pray for them, also activating what we had been taught by actually doing it.  This made the whole process real and grounded.  Huge thanks to the amazing women of God who led us so humbly and who inspired me personally to want to be involved in the Healing Rooms and see our Father God change lives.  It was a wonderful day, especially to see my Indian friend healed so simply and powerfully.  She will never forget what happened and as soon as we came home she rang round all her family to tell them the good news.  Thank you again for all you taught us and the love you shared.”